The main goal for me to go to Sweden was to see and sign off my newly ordered 2017 Volvo XC90, and visit the factory located at Gothenburg at the same time.

Gothenburg is the second-largest city in Sweden and the fifth-largest in the Nordic countries.  It is situated by the Kattegat, on the west coast of Sweden.  We only spent couple of days at Gothenburg, during which the weather was cloudy and cold entire time.  The first morning after arrival, a representative from Volvo headquarter picked us up from hotel and drove us to the factory.  There I finally saw my newly built 2017 XC90 (the last one in this group of pictures).  After signing some documents to allow the factory start shipping processes to US, we visited Volvo Museum.  There displayed the countless car models in Volvo history, some of them are huge and others are tiny.  One of them (the bright blue one, second from the last) was even built by legos.

We were served with Swedish meatballs at lunch.  Then we were taken by a tram to see the production lines, where any cameras were not allowed.  The automation dominated production lines were operated by bunch of robots.  They were like giant human hands to move the parts around, assemble them together by welding, clutching or fitting.  It was amazing to see those flat metal sheets turning to beautiful vehicles by the end of the lines.  Normally around one thousand vehicles were built there per day.

The late afternoon just before we left Gothenburg, I snapped couple of photos of its landscape and skyline.  Then we headed toward its train station for Stockholm 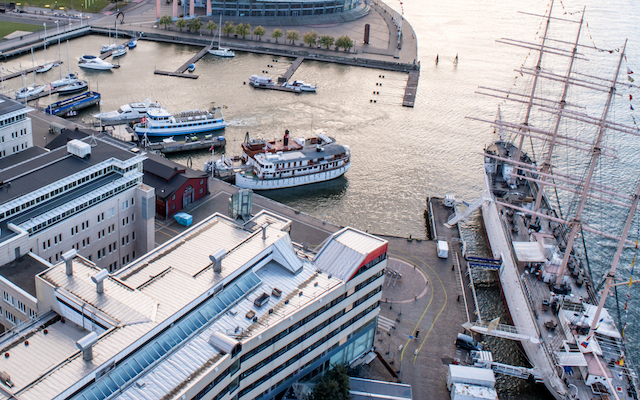 3 thoughts on “The Capital of Volvo – Gothenburg”