At the late spring or early summer a baby rabbit was born underneath the deck at our backyard.

My daughter, Amber, named the baby as “Hermans”.  Through entire summer we often saw Hermans, which was only couple of inches long, running around with her parents to seek foods or just have fun.  Gradually Hermans grew up, less and less we saw her parents companying her.  By the end of the summer we couldn’t see her parents anymore and Hermans was acting alone.  We are often amazed by how much faster a rabbit could gain independence, compared with any human beings.  We didn’t see Hermans entire fall, we thought she relocated to a better place.

Yesterday afternoon by chance I peeked out of a window at our living room, here is our long – lost friend – Hermans.  She has grown so much and gained a lot of weight ready for a long winter at Minnesota. 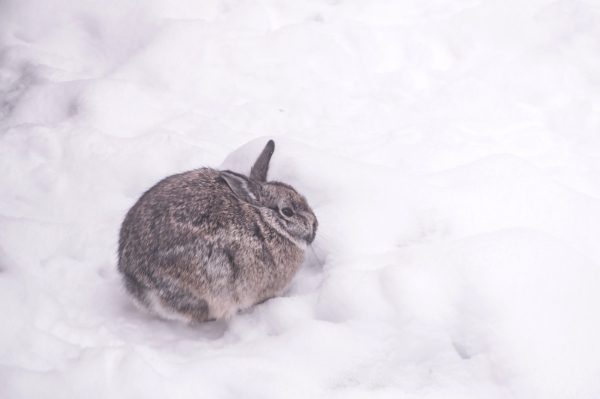 The grass at backyard has all gone or buried in snow.  So what is Hermans’s Anticipation?  We all believe she just came out of her home, which is still underneath out deck, to tell us she is with us during this Christmas season, maybe forever, at least we hope so!

3 thoughts on “What is the Anticipation of Hermans?”